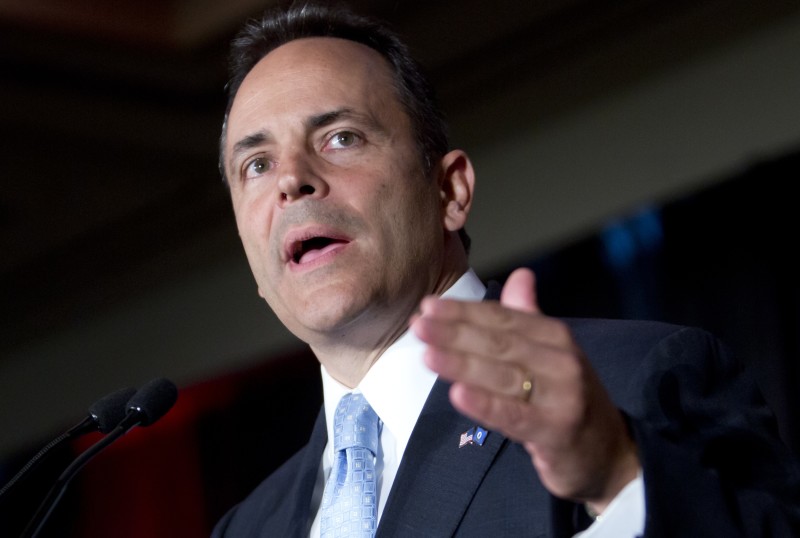 Gov. Bevin: Rep. Dan Johnson Is 'An Embarrassment,' But Won't Call For Resignation

A day after both of Kentucky’s major political parties called for Rep. Dan Johnson to resign amid sexual assault allegations, Gov. Matt Bevin says he’s still reviewing the story and hasn’t formed an opinion on the matter.

“I don’t have any idea what’s going on,” Bevin said of the allegations on the Terry Meiners show on WHAS Radio.

“I will say this: if there’s truth to these things they are reprehensible and people like that should not be serving the people of Kentucky, period.”

Johnson, a preacher from Mt. Washington, has been accused of sexually assaulting a member of his church when she was 17 years old in 2013.

The allegations came to light in an extensive investigation of Johnson published Monday by the Kentucky Center for Investigative Reporting.

Johnson flatly denied the allegations Tuesday morning in a press conference held at his church on the outskirts of Louisville.

Kentucky’s Republican and Democratic parties called for Johnson to resign his seat after the story was published. Later, the call was echoed by Republican leaders of the House of Representatives, to which Johnson was first elected in 2016.

Bevin said he doesn’t know Johnson personally and that he wasn’t willing to cast judgment on him at this point in time.

“It was a colorful story, I will say that. And if there’s truth to it, quite a character,” Bevin said.

“And if truth to the parts of it that are most nefarious, there is truly criminal activity and people should be held accountable to it if it’s true.”

Four other Kentucky Republican lawmakers have recently been implicated in a separate sexual harassment scandal, which led to the resignation of former House Speaker Jeff Hoover.

Hoover admitted to exchanging sexually charged text messages with a staffer and that he and GOP Reps. Brian Linder, Jim DeCesare and Michael Meredith secretly settled a complaint she made out of court.

Bevin has demanded that the four GOP representatives resign from elected office and has fumed that members of the state Republican Party’s central committee voted down a motion for the accused lawmakers to step down.

On Meiners’ show, Bevin criticized his own party for saying Johnson should resign but not doing the same for the other accused Republicans.

“The hypocrisy in this that we ask certain people to stand down, but not other people, why is that? Do we have certain people who are allowed to sexually harass?” Bevin said.

Johnson first drew headlines last year after posting racist images and comments to his Facebook page during his campaign.

The Kentucky Republican Party disavowed Johnson at the time, but he still won his seat by about 200 votes over the Democratic incumbent and was welcomed into the House Republican caucus.

Though Bevin didn’t call for Johnson to step down, he did call him an embarrassment.

“His behavior and these allegations and other things that he has done even when he was a candidate leading up to his elections have been an embarrassment to the party, they just have,” Bevin said.

Kentucky’s two U.S. Senators, both prominent Republicans, haven’t weighed in on the allegations against Johnson. U.S. Senate Majority Leader Mitch McConnell and U.S. Senator Rand Paul did not return requests for comment on this story.