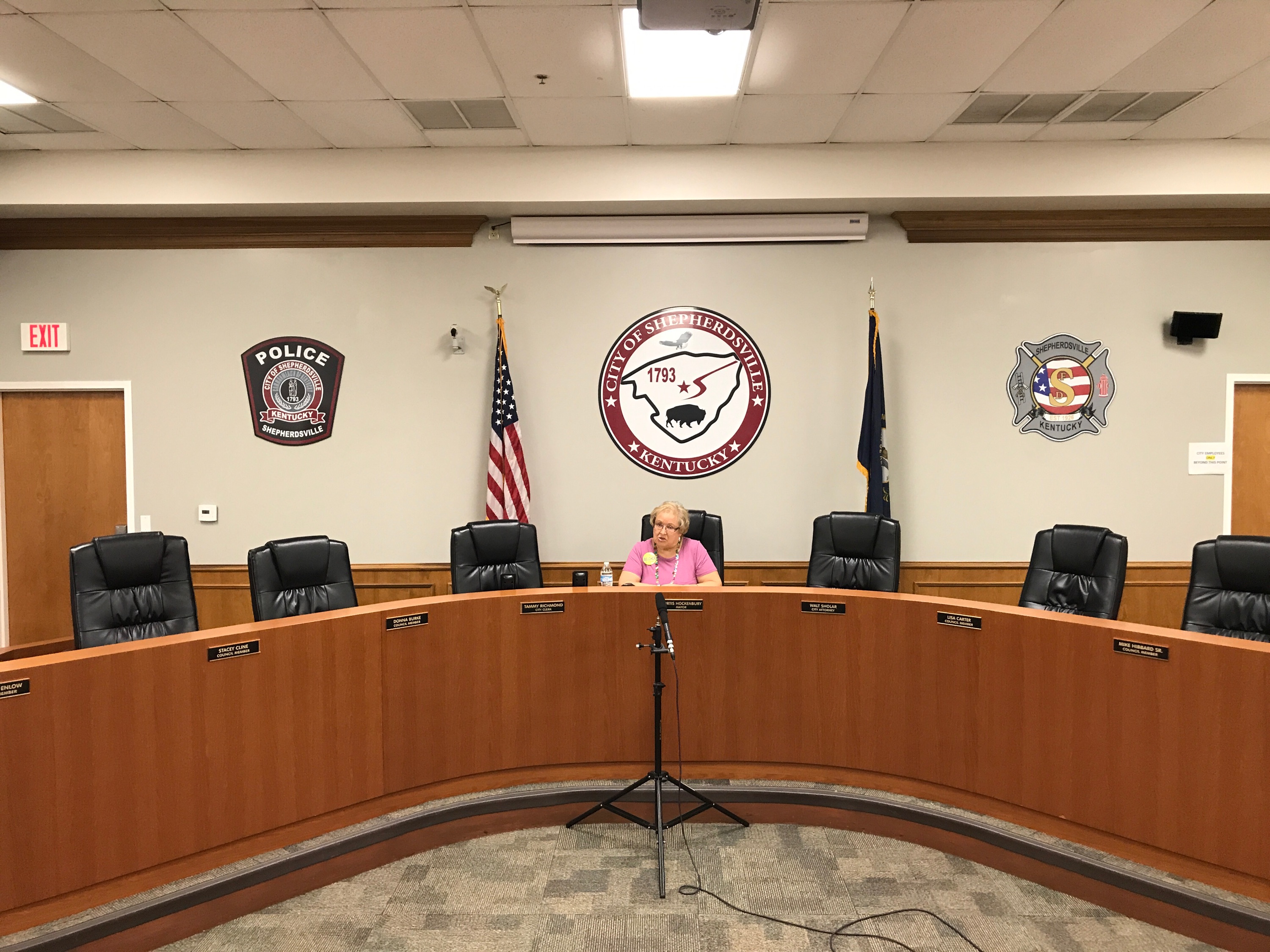 SHEPHERDSVILLE, Ky. — Linda Belcher sat alone at the front of the crowded room, fielding questions from the Bullitt County Chamber of Commerce.

How can we unite Bullitt County? Belcher said there’s no easy answer; some people just don’t want to work together.

But what some in the gathering really wanted to know is this: Where was Rebecca Johnson, the Republican candidate, and why wasn’t she there to take questions?

The February 6 forum at the Shepherdsville Government Center was designed to bring the two candidates in next Tuesday’s special election face to face. Instead, Belcher, the Democratic candidate, was flanked by empty chairs.

Barbara Crume arrived early and got a front-row seat. She’s a Democrat and supports Belcher. She said Johnson’s absence sends a bad message to voters.

“It’s kind of negative that she wouldn’t come support herself,” Crume said.

Larry Coy, a Republican candidate for sheriff, said he thought the forum was a good opportunity for him and others to mingle with voters. “I do wonder why Rebecca didn’t show up,” Coy said.

The winner of the election will fill the vacancy in the 49th House District created by the December 13 death of Johnson’s husband, Dan “Pope” Johnson.

Dan Johnson died by suicide two days after the Kentucky Center for Investigative Reporting published an investigation detailing his long history of lies, exaggerations, bigotry and criminal activity. KyCIR’s report also included allegations by a young woman that Johnson sexually assaulted her on New Year’s Eve 2012 at the Heart of Fire Church the Johnsons co-pastored.

Dan Johnson won the election in 2016 after narrowly defeating Belcher, who held the seat for six years.

Belcher and Rebecca Johnson offer voters a sharp contrast in style, as well as in substance.

The day after Dan Johnson died, Rebecca Johnson announced her candidacy to finish his term.

Johnson, 56, was born in Texas but raised in Jefferson County, where she graduated from high school. Her work history in the past 30 years has consisted primarily of activities related to the Heart of Fire Church.

Her campaign platform and ideology mirror that of her late husband: Support for medical marijuana. Pension reform. Pro-gun. Anti-abortion. Support for teachers.

She claims that she and her late husband worked hand-in-glove for decades. She also has campaigned on her desire to “continue the work of my husband,” and to “finish the race Dan started.”

A fundraising solicitation sent out the day after the Bullitt County forum by the Kentucky Democratic Party and former Gov. Steve Beshear seized on that connection — and sought to tarnish Rebecca Johnson with it.

“Racists, sexual predators, liars, and criminals have no place serving in public office,” the solicitation stated. “Defiantly unapologetic for her husband’s racism, deception, and hypocrisy, Rebecca has vowed to ‘finish what he started.’

“The people of the 49th District deserve better. They are ready to have a State Representative who they can be proud of again.”

Johnson, her campaign manager and the head of the Bullitt County GOP didn’t respond to numerous requests to interview Johnson.

When KyCIR reporters went to one of her recent campaign events in Shepherdsville, her supporters barred them from entering the building, locked the door and covered the windows.

Similarities between Rebecca Johnson and her late husband are not limited to their political agendas. She too has made misleading statements from time to time. And prior to announcing her candidacy, she too expressed right-wing, racist, homophobic views on Facebook, raising alarm about transgender women using women’s bathrooms, Muslims, Barack Obama and immigrants, among others.

In one post from 2012, she joked about her husband cupping her breast.

In recent years, she’s posted photos and memes making light of domestic violence and drug use, and endorsing secession. She also used profanity while disparaging refugees and pushed for legislation to prohibit Sharia law in Kentucky in a September 2015 post.

And in August 2015, she disparaged her own party, saying: “F the Republican Party. I’m for America, not a party!”

State campaign finance records show that Belcher has four times as much money in her coffers as Johnson, but the bulk of Belcher’s $36,000 was carried over from her last election. Johnson has received donations from several Republican state legislators and Frank Simon, director of the ultra-conservative American Family Association of Kentucky.

During Johnson’s campaign, she’s touted her resume as proof she’s ready for the legislature. But Johnson’s claims about her management experience appear exaggerated.

Johnson asserts on her campaign website that she “managed hundreds of employees” in the 1980s for a company based at Louisville International Airport. But David L. Vaughan, who was vice president and general manager of the company at the time and who hired Johnson, said that wasn’t true.

Vaughan told KyCIR that Butler Aviation had no more than about 225 total employees and that Johnson managed only about 25 of them.

But Vaughan added that after Johnson was hired for an entry-level position, she moved steadily up the chain to supervise others.

“Her skills were very, very good,” he said.

While touting her management and business experience, Johnson does not mention the chronic financial and legal issues that have plagued the Heart of Fire Church and the Johnsons for the past 30 years.

Johnson’s work at Heart of Fire tied her to “every facet” of church life, according to the church’s website. The church’s fellowship hall periodically was the site of illegal alcohol sales that drew the attention of state and local Alcoholic Beverage Control enforcement. Dan Johnson was issued three citations for selling alcohol without a license between 2008 and 2015.

Rebecca Johnson was not named in any of the citations. But KyCIR reporters witnessed another instance of the illegal sales during a visit to the church last summer, when she was behind the bar. Johnson approached the reporters at the church bar and rebuked them for their work. Beer was being sold in plain sight for a $2 token.

And a half-dozen current or former church members and visitors also told KyCIR that Johnson was a regular presence at the church at events when alcohol was provided illegally, including sometimes to minors.

Johnson’s financial problems date back to 1987, when federal records show she filed for personal bankruptcy.

Over the past 20 years, the church also has been subjected to numerous liens and lawsuits stemming from unpaid bills. The Johnsons faced more than $160,000 in liens in the late 1990s for unpaid bills relating to construction work, paving, painting and equipment rental, public records show.

A 2000 fire destroyed the Heart of Fire Church.  Asked under oath in a related court case whether she oversaw church finances, Johnson said, “Under my husband’s supervision….He pretty much told me what to do and I carried it out.”

In the same court case, records show she apparently lied under oath when she said she had never been paid more than $10,400 a year as a church employee.

In a 2009 court case, a Fairfield County, Ohio judge ruled that the church owed $26,000 to settle a bill for bingo supplies. The judgment has never been paid.

The state filed a $3,158 lien against Rebecca Johnson in 2002 for unpaid taxes. Two years later, the Johnsons were subjected to a $4,203 federal income tax lien. Both liens were released once the delinquent amounts were paid.

The Johnsons’ 2017 property tax already had been reduced by about 14 percent through a homestead exemption granted by the county in 2014. The exemption is available to people who swear under oath that they either are at least 65 years old or “totally disabled.”

Both Johnsons were in their 50s when they obtained the exemption. The legal standard for total disability is “the inability to engage in any substantial gainful activity” due to mental or physical impairment.

Because Rebecca Johnson was unwilling to be interviewed, KyCIR was unable to ask her about the alcohol violations, her apparent misstatements and her long history of financial problems.

Belcher, 69, is a lifelong Bullitt County resident who worked in the county school system for more than 30 years, mostly as a teacher and principal. She has two college degrees, and her legislative tenure was relatively low-key, reflecting her personality.

She served three terms as the state Representative for the 49th District after her husband, Larry Belcher, died in October 2008. He had held the seat for nearly six years prior to her election.

Belcher is for abortion rights, and her campaign has championed issues including pension and tax reform, more forceful action on opioid addiction and better roads.

Her listed interests include gardening, reading, civic activities, crafts, flower arranging and playing with her dog.

As a legislator, Belcher largely stayed out of the news — until the 2016 election, when her opponent, Dan Johnson, made national headlines for comparing the Obamas to apes.

She sponsored or co-sponsored dozens of other bills, legislative records show. Among them: requiring law enforcement agencies to provide certain data to the National Crime Information Center, and a bill that requires school districts to provide staff and students training on “being a good digital citizen.”

At the candidate forum, Belcher said, if elected, she’ll focus on improving the county infrastructure to help attract jobs and combat the opioid epidemic.

“Anything to do with working families, I think it’s really important that we realize those people really make a difference to our communities,” Belcher said.

Events like the forum are good places for voters to get an idea of what the candidates stand for, Belcher said. And she’s confident that her track record resonates well with voters.

“People here in Bullitt County know me,” Belcher said. “Not so much my opponent. Because again, over the years, I’ve not seen her involved in Bullitt County. So they really needed to hear her tonight, more so than me.”

But Johnson wasn’t there.

She had declined in advance to attend the forum, citing a conflicting “event” scheduled by her campaign manager.

She also had told the chamber that she was too busy to provide recorded answers to the same questions posed to Belcher.

But Johnson’s campaign website listed no such conflicting event on the day of the forum. Adams, her campaign manager, refused to discuss it.

“We’re going to keep you guessing on this one,” he said.