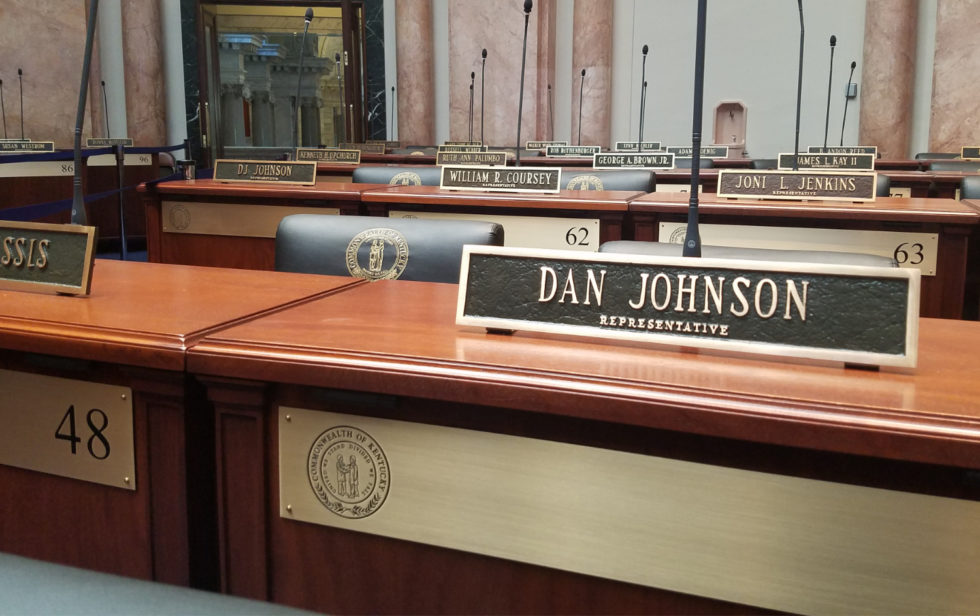 Why Coping With High-Profile Suicides Can Be Challenging

Kentucky Republican state Rep. Dan Johnson died last week by suicide, shocking many in his Bullitt County district and across the country.

Johnson — a preacher whose Heart of Fire Church is in Fern Creek — was the subject of a recent in-depth investigation by the Kentucky Center for Investigative Reporting. The report, released Dec. 11, dismantled Johnson’s longstanding claims of heroics around 9/11 and a variety of his other claims about the role he played in historic events.

The investigation also revealed allegations of arson against Johnson and reported the story of Maranda Richmond, a former member of Johnson’s church who accused him of sexual molestation when she was 17 years old. The investigation is based on public documents and a wide variety of on-the-record sources.

On Tuesday, the day after the KyCIR report’s release, Johnson denied that allegation in a press conference at his church. He killed himself the next day. Johnson’s funeral was held Monday.

A suicide by a person who holds a public position can have a widespread impact on those around him and those who follow him, said Steven O’Connor, a suicide researcher at the University of Louisville.

“There’s so many different people in organizations that are involved with Dan Johnson’s life, and now with his death,” O’Connor said. “They experienced him in a different way, but everybody has to come to terms with his death, and that’s a really hard thing to do when when someone dies in a traumatic way like a suicide. So in the weeks and the months to come, I think everybody that was in his orbit is going to be trying to make sense of what happened.”

O’Connor, an assistant professor in the Department of Psychiatry and Behavioral Sciences at U of L, is also associate director of the university’s Depression Center, where he does research on the topic of suicide prevention. He did not know Johnson personally and had no involvement in the KyCIR investigation.

O’Connor said people are often left feeling confused when someone in a public position takes his life.

“I think that when people are left, and they’ve survived someone who’s taken their life, there’s an effort to try and make sense of a situation that you didn’t see coming,” he said. “When you’re a family member or a close friend or you’re part of a church community, and you lose someone to suicide, I think you just have a lot of unanswered questions.”

In various TV interviews, Rebecca Johnson, who was married to Dan Johnson for more than 30 years, has blamed the media and rival politicians for her husband’s death. Louisville Public Media, the parent company of both WFPL News and KyCIR, has rejected those claims and stood by the story.

O’Connor said there are often a variety of factors that contribute to a person’s decision to commit suicide. And despite the fact that suicide is hard to accept, he said, it’s best to resist the temptation to construct a narrative that explains someone else’s personal choice.

O’Connor also cited several risk factors for suicide, including a history of depression, a previous inpatient stay in a psychiatric unit and substance abuse.

O’Connor treats patients through a U of L outpatient clinic, and he also works with veterans at the Robley Rex VA Hospital in Louisville. He said that with his own patients, he looks for indicators like hopelessness and a condition called “perceived burdensomeness.”

“You feel like you’re a burden on other people, and that somehow if you were not around that they would be better off without you,” O’Connor said.

“Another issue is feeling really disconnected from other people, a term called ‘thwarted belonging,’ where you don’t feel as if you are part of a larger group. You’re not part of a larger meaningful endeavor.”

In terms of media coverage of suicide, O’Connor said it’s important to mourn the loss of a community member, while at the same time not trying to explain or justify someone’s inner story.

“You want to portray the facts of the situation, but you don’t want to overstep and try to put together a narrative that you think explains completely why someone decided to do what they did,” he said. “There’s a desire to have that nice clean narrative, but it’s just not something that we’re always able to piece together, especially if you have limited information.”

O’Connor emphasized that suicide is preventable and that media coverage of suicide should include that message.

“The vast majority of people in the United States who have serious thoughts of suicide do not make suicide attempts,” he said. “At that time, someone is seeing what they’re facing as an insurmountable challenge, but if people get proper help, and get some perspective and maybe some time passes, they might start to see that they actually had more options.”

If you or someone you know is contemplating suicide, here are some resources that may help.

This story was written by Tara Anderson of WFPL.