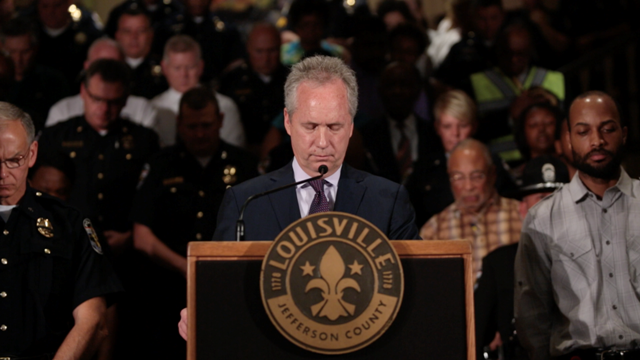 Louisville Mayor Greg Fischer wants an internal review of his police department’s handling of a years-old molestation investigation into a local preacher and state lawmaker.

The sexual abuse allegations were revealed Monday by the Kentucky Center for Investigative Reporting in “The Pope’s Long Con,” a five-part investigation of state Rep. Dan Johnson.

A then-17-year-old girl claimed Johnson, a Republican from Mt. Washington, molested her in the basement of his church following a New Years Eve party. Johnson is the pastor of the nondenominational Heart of Fire Church in Louisville’s Fern Creek neighborhood.

Johnson refused repeated interview requests and had yet to comment on the claims as of midday Monday. LMPD officials declined to comment.

Fischer, speaking Monday at an unrelated news conference, said residents should have total confidence that police investigations are “taken seriously and every avenue needs to be investigated.”

“I will ask for an immediate response as to what is the status of the case, give me a review of what took place with the case and why it was closed,” Fischer said. “I will look into it.”

Richmond claimed Johnson forced himself upon her early New Years morning, 2013, as she lay on a couch in the church’s basement. Richmond said he kissed her — shoving his tongue into her mouth. He pushed his hands down her pants and penetrated her with his finger, she said.

The case file makes clear: the detective never attempted to interview Johnson. And it appears the detective reviewed the case under the wrong criminal classification, characterizing it as a misdemeanor, rather than a more serious felony offense, according to four criminal justice experts who reviewed the case at the request of KyCIR. The experts were unanimous: police botched the investigation.

Following inquiries from KyCIR reporters, an LMPD detective called Richmond this fall and indicated the case was being re-opened, Richmond said.

On Monday, LMPD spokeswoman Jessie Halladay refused to confirm or deny Richmond’s claim on the status of the investigation.

The criticism of Louisville police comes amid a string of accusations and public condemnations of the agency.

Some Louisville Metro Council members have for months called for the removal of police chief Steve Conrad. Their calls come amid scandals, questionable spending practices and troubling violent crime statistics.

Yet Fischer remains a staunch advocate for the agency and Conrad.

On Monday, he continued to stand by Conrad, saying the chief does a good job.