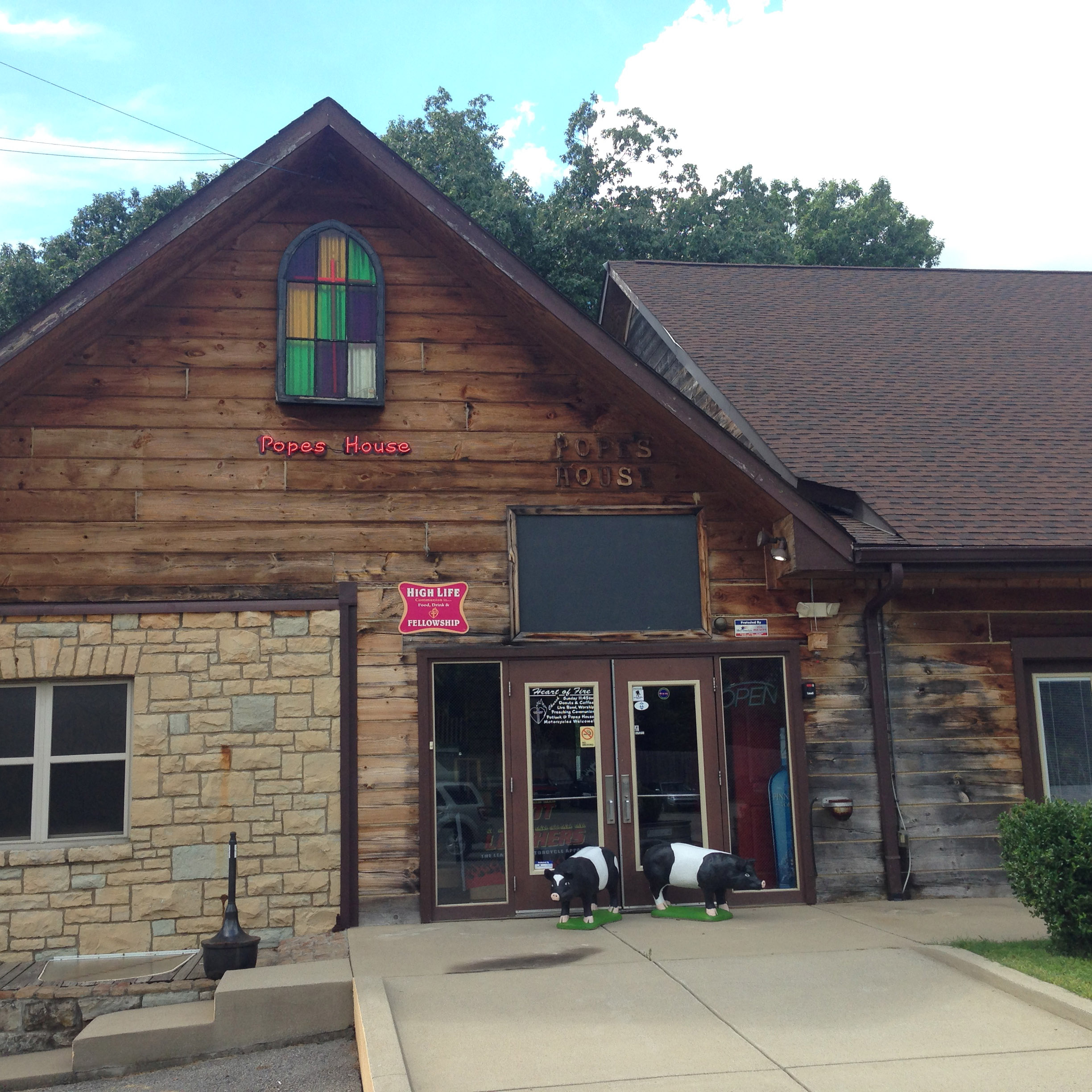 As a rash of arsons and bombings swept across the country in the 1990s, dozens of synagogues and mostly African-American churches were left damaged or destroyed.

In a January 1997 radio address, President Bill Clinton pledged his allegiance with the targeted congregations, calling on “all Americans of conscience” to help the churches rebuild.

His administration was implementing a $10 million loan guarantee program that eventually helped about 16 churches recover from fires. One of the largest guarantees, for $1.5 million, went to a church in Kentucky with a mostly white membership.

Its pastor was suspected of setting fire to his own church in June 2000, although he was never charged, and he blamed the Ku Klux Klan. In the ensuing years, the church moved into a new sanctuary. The fellowship hall it built with that federally guaranteed loan would be adorned with Confederate flags. And the pastor periodically would engage in racist, anti-Muslim, anti-government rants – the antithesis of what Clinton seemed to have in mind.

That church: Heart of Fire in Louisville, led by the late Danny Ray “Pope” Johnson.

But Heart of Fire is now effectively owned by the federal government because the church didn’t pay the mortgage. And now the U.S. Department of Housing and Urban Development has obtained a court order to sell the church.

Johnson, who was a Kentucky state legislator from Bullitt County, killed himself last December 13, two days after the Kentucky Center for Investigative Reporting published an exposé detailing his life of lies, exaggerations and criminal acts.

Many recipients of HUD loan guarantees were small African-American churches.

Eileen Lindner reviewed applications for HUD as part of her work with the National Council of Churches USA in the early years, before Johnson applied. She said his church was “not typical of those that were being funded.”

“Nothing here sounds like what we’d do,” Lindner said of the Heart of Fire loan guarantee. “I cannot believe that HUD would have extended that loan without vetting it.”

It’s unclear what HUD knew about Heart of Fire before granting its loan guarantee. The agency refused to answer questions about the program in general, or about Heart of Fire’s guarantee in particular, and it has not fulfilled a records request filed by KyCIR in February.

The recent court order didn’t come until after Johnson’s death, but records show that he knew that losing the property could be imminent. The government had already made one attempt to sell the property while he was alive.

The church’s debt to the federal government now exceeds $2 million, and HUD has grown weary of waiting. The church property at 5101 Bardstown Road in Fern Creek could be auctioned off later this year unless the church and the government can work out some agreement for repayment.

HUD requested and obtained a court order of sale on February 8, more than two years after it first asked that the property be sold. On Monday, the church and the federal government agreed to delay the foreclosure for 90 days while they “explore settlement options.”

The nearly six acres of church property are assessed at about $634,000, according to Jefferson County property valuation administrator records. If a sale generated less money than the church owes, it’s unclear whether HUD would attempt to collect the balance or whether taxpayers might be stuck with it.

It also remains to be seen what would become of the small but controversial church. Would it move elsewhere? Would it survive, or fold?

Rebecca Johnson, who took over as church pastor after her husband died, declined to discuss the possible foreclosure. The church’s attorney, Matthew Stein, also declined to answer questions.

The guarantees offered by HUD enabled churches to obtain below-market interest rates on loans from private lenders and allowed repayment over 20 years.

In 2006, Heart of Fire received the third-largest allocation — a  $1.5 million loan from Stock Yards Bank & Trust guaranteed by HUD.

The church used the federal program to secure a mortgage to buy the sanctuary it was leasing, and to build a fellowship hall – complete with a bar.

Henry Cisneros was secretary of HUD when the loan guarantee program was instituted. After KyCIR described the Heart of Fire Church to him in a telephone interview, Cisneros responded:

“It seems to me that it doesn’t meet the criteria that we originally had set.”

In its loan application to the bank, Heart of Fire made clear that it was seeking to purchase existing property and build an “all-purpose” building.

That building, called “Pope’s House,” proved to be a popular gathering spot. Raucous weekend parties have been commonplace, though they seemed to wane after KyCIR paid a visit to one on a Saturday afternoon last summer. The church has been cited three times for selling alcohol without a license, and church members have told KyCIR that minors sometimes were given free drinks.

KyCIR’s report in December also revealed for the first time that a young woman, then 17, alleged that Johnson molested her in the church basement on New Year’s Eve 2012. Johnson was never criminally charged.

Johnson held a press conference on December 12 and proclaimed his innocence. He killed himself the following day.

Barely two weeks after HUD agreed to back Heart of Fire’s loan, court records show, the church’s leaders showed signs that they weren’t going to pay it.

“Given the duress we are under, it would be ideal if this loan could be change (sic) to a grant,” Ryan Meredith, the church’s administrative assistant, wrote to HUD in December 2006 in an email signed by Johnson.

This was not the first time that Heart of Fire had experienced financial problems or engaged in questionable financial practices. Unrelated court records detail a long history of money troubles, including dozens of bounced checks and credit-card debts leading up to the fire in June 2000.

Stock Yards Bank told Heart of Fire in 2008 that its loan was in default.

In response, Johnson went straight to the top. He appealed to President George W. Bush for help.

“God has used you and your father to save our country, to help our world in a way no other family has in the history of the United States of America. We are blessed!”

Johnson then asked Bush to make the loan a grant, which he claimed Clinton personally told him was possible.

When no relief came, Johnson wrote in February 2009 to President Barack Obama. Years later, during his 2016 legislative campaign, Johnson would mock the president and First Lady Michelle Obama in a racist Facebook post characterizing them as chimpanzees.

“Turn this into a grant or restructure our loan to save our church and home. We have invested all and have much to loose (sic).”

Six months later, Assistant HUD Secretary Mercedes Marquez responded on behalf of Obama that HUD had no authority to do what Johnson had requested.

“Therefore, Danny Johnson Heart of Fire Ministries Inc. has a debt obligation to the federal government in the amount of $1,565,987, minus any net proceeds that might be received from the sale of the property,” Marquez wrote.

But the church’s debt remained unpaid. With the loan in default, in January 2009, HUD paid out its guarantee to Stock Yards Bank for $1.566 million and acquired the mortgage on the church property.

Last month’s sale order resulted from a lawsuit filed in September 2010 by Flynn Brothers Contracting, Inc., which sought to collect $22,400 for work performed at Heart of Fire. The federal government was named as a defendant, and HUD then filed its claim against the church. The contractor’s debt also remains unpaid.

In recent years, following his unsuccessful presidential appeals, Johnson tried other strategies to avoid responsibility for the loan.

In a May 2015 sworn statement, Johnson repeatedly described the debt as a “grant.” He even offered up a document that had the word “grant” in it. But under questioning, he admitted that the document had nothing to do with the church’s loan.

Johnson then admitted that Heart of Fire owed HUD money and said, “Our church is now owned by the government.”

But even after making that admission, Johnson tried once more to deflect responsibility, claiming in the sworn statement to have been driving one night in 2009 when he received a telephone call from Ben Bernanke. At the time, Bernanke was chairman of the Federal Reserve Board of Governors — among the most powerful economic positions in the United States.

According to Johnson, Bernanke asked for his account number.

“He said, ‘we’re paying off your church right now,’” Johnson said. “He took the number, the account number….and in moments it was paid off.”

Johnson offered no evidence to support that claim. Efforts by KyCIR to reach Bernanke were unsuccessful.

Johnson also claimed under oath that Thann Young, a longtime HUD official in Washington, told him the church would “never have to pay for this.” Young said in a written response filed in court that he personally told Johnson the opposite: that the loan would not be converted to a grant. Young declined an interview request.

Johnson’s final strategy in a January 2017 sworn affidavit was to shift blame to Stock Yards Bank and HUD. The judge rejected that argument.

The bank knew — or should have known — that Heart of Fire did not have the financial resources to service the debt, Johnson said in the documents. He further contended that both HUD and the bank “chose instead to set us up for failure.”

Rebecca Johnson has sought to continue her husband’s legacy in the months since his death. She ran for the remainder of her husband’s term in the 49th District House seat, but lost in a special election in February. This month, Johnson withdrew from the primary for the next term.

“I feel my time can be best served with my family and my ministry,” she said in a statement released to some media outlets.

She now leads Sunday worship at the church. But she appears to have said nothing publicly about Heart of Fire’s precarious financial standing. So it’s unclear what current church members know about it, much less where they might be worshiping later this year.

Clarification: This story has been updated to more precisely describe the characterization of the church’s current ownership.