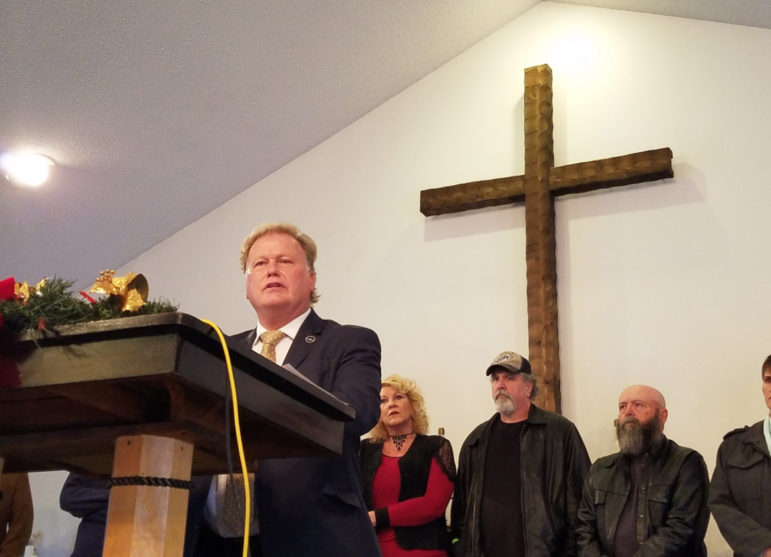 Kentucky Rep. Dan Johnson refused to resign Tuesday morning and said an allegation that he sexually assaulted a teenager “has no merit.”

Johnson, speaking at a news conference at his Heart of Fire Church in Fern Creek, denied ever committing arson or molesting a then-17-year-old member of his church in 2013. He implied that the story by the Kentucky Center for Investigative Reporting was motivated by funding sources to NPR and that the allegations were about politics.

“This allegation concerning this lady, this young girl, absolutely has no merit,” Johnson said. “These are unfounded accusations, totally.”

About a dozen family members and friends stood behind him at the podium as he spoke to nearly 20 members of the media. Before speaking, he led them in a rendition of “Oh Come, All Ye Faithful.”

Johnson blamed the current political climate for the accusations against him, and said he’s not a perfect person. But in his case, he said, “NPR is casting the first stone,” and held up a rock with NPR written on it.

“The Pope’s Long Con” was published Monday by the Kentucky Center for Investigative Reporting, which is part of WFPL. WFPL is an NPR member station.

The investigation included an accusation from 21-year-old Maranda Richmond that Johnson sexually assaulted her in the basement of his Fern Creek church in 2013. She was 17 at the time.

The Louisville Metro Police Department opened an inquiry, but detectives later closed the case, citing a lack of interest or assistance from the teen. She told KyCIR she never wanted the case abandoned and that detectives reopened the case months ago, following KyCIR’s inquiries. Louisville Mayor Greg Fischer on Monday called for a review into the LMPD’s handling of the case.

“The Pope’s Long Con” also detailed how the Bullitt County lawmaker exaggerated or lied about his resume, including heroics on 9/11 and his supposed service as a White House chaplain. Further, Johnson was indicted in the attempted arson of his car and was a suspect in the arson of his church, the report noted.

From the pulpit on Tuesday, Johnson noted that KyCIR reporters interviewed family members and church members, and complained that the story spanned the course of his whole life.

“I don’t think they ever quit investigating from the time I won the election,” Johnson said.

Johnson was asked if he had ever paid anyone to commit arson. His response: “No, I have not.” But according to Jefferson County Police records, Johnson was arrested in October 1985 for his role in a plot to burn up his car so he could collect insurance money.

The records show that after filing a stolen vehicle report, Johnson admitted paying a woman to help him get rid of the car. Johnson owed more than $10,000 on it.

Less than two months after his arrest, Johnson was indicted for complicity to commit arson and falsely telling police that he didn’t know what had happened to the car. He pleaded not guilty and the charges were dismissed in February 1987 after he completed a six-month pretrial diversion program.

Leadership from the Republican and Democratic parties called Monday for Johnson to step down. Gov. Matt Bevin didn’t name Johnson specifically, but reiterated what he said last month — that any elected official with a sexual assault or harassment allegation “that has been settled, proven or admitted to be true” should resign.

Johnson said there’s no reason for him to resign, because he didn’t do the things he’s accused of.

He refused multiple requests for an interview from KyCIR in the course of the seven-month investigation.

Johnson said he’s “mad as can be” and that Richmond’s accusation of sexual assault is false.

“She has got to be at a very dark place in her life,” Johnson said.

Richmond spoke with KyCIR at length and agreed to go public with her story. Richmond shared a Facebook message from Johnson and notes from her counselor in the months after Johnson allegedly assaulted her. Richmond’s complaint to police was made in 2013, well before Johnson was a candidate for political office.

Johnson said he’s become a “hero” for people concerned about pensions and medical marijuana, and that the political climate makes it hard for regular people to be in office.

“I think this is an assault on real people,” he said. “There’s no perfect people.”

He said the whole piece by KyCIR was “outrageous.” As he left the podium, a reporter asked if he’s ever raised the dead, a claim the pastor has made publicly.

This story has been updated.