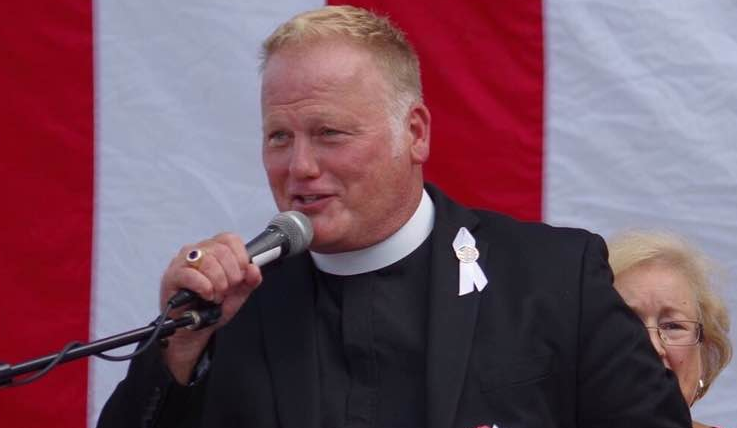 A Republican state representative from Bullitt County has been accused of sexually abusing a girl in his church, among other misdeeds, in a new investigative report from the Kentucky Center for Investigative Reporting and Louisville Public Media.

Rep. Dan Johnson, a preacher and freshman lawmaker from Mt. Washington, had yet to respond to the allegations as of noon Monday. A receptionist at his legislative office said he was not available.

Johnson, who is known as “the Pope” and pastor of Heart of Fire Church in Louisville’s Fern Creek neighborhood, has previously drawn attention for posting racist comments and images on Facebook.

According to the KyCIR report, a woman alleges that Johnson groped and molested her after a New Year’s party in 2012, when she was 17 years old. (Read “The Pope’s Long Con“)

Louisville police opened an investigation. The report states that police reopened the probe earlier this year amid reporters’ inquiries. On Monday, Louisville Mayor Greg Fischer called for an internal review of the police department’s handling of the case.

The article also details years of deception and alleged criminal activity from Johnson.

The Republican Party of Kentucky called for Johnson to resign after the report was published.

“Following today’s extensively sourced and documented story from the Kentucky Center for Investigative Reporting, we once again find ourselves in a position where we must call for him to resign, this time, from the Kentucky General Assembly," said Republican Party of Kentucky chair Mac Brown in a statement.

The state Democratic Party also called for Johnson to resign.

“Given the seriousness of these allegations, Rep. Johnson should step down immediately,” said Mary Nishimuta, executive director of the Kentucky Democratic Party.

“This is indicative of a corrupt culture in Frankfort that the Republican Party continues to accept. Kentucky’s families deserve better.”

Johnson was disavowed by the Kentucky Republican Party during his campaign last year after posting racist pictures and comments to his Facebook page, but ended up defeating incumbent Democratic Rep. Linda Belcher by fewer than 200 votes.

The Republican Party of Kentucky called for Johnson to suspend his campaign at the time, though after the election, then-House speaker Jeff Hoover said that Johnson would be “welcome in our caucus.”

House Republican leaders and Gov. Matt Bevin have not responded to request for comment on the allegations. But Bevin did tell the Herald-Leader he was unaware of the allegations against Johnson.

“I don’t want to talk about all this nonsense, gracious, lets wait until we get all the facts,” Bevin said. “You guys are like ricochet rabbits on this stuff.”

Bevin did reiterate his position that lawmakers in Frankfort need to be held to a higher standard when it comes to inappropriate conduct.

House Democrats also called for Johnson to resign and for an investigation to be conducted.

“The allegations of felony sexual abuse and other crimes against Rep. Dan Johnson are deeply troubling and demand his resignation from the House of Representatives," House Democratic leaders said in a statement.

"All of his unlawful acts should be investigated to the fullest extent, but we particularly urge the appropriate law enforcement agencies to carefully re-examine accusations of sexual misconduct so that justice is secured for his alleged victim.”

First reported by the Louisville Courier-Journal, Hoover and GOP Reps. Brian Linder of Dry Ridge, Michael Meredith of Oakland and Jim Decesare of Bowling Green secretly settled a complaint filed by the woman earlier this year.

Bevin has previously called for all members accused of sexual harassment to resign their elected positions.

Johnson has proposed several controversial pieces of legislation this year, including a total ban on abortions and a requirement for internet-enabled devices sold in Kentucky to have porn-block software.

This story has been updated.