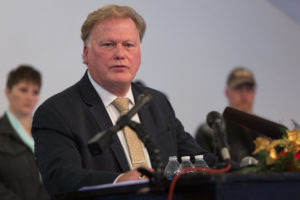 Johnson, a Republican from Mt. Washington, fatally shot himself next to a bridge in a rural area Wednesday evening after posting an apparent suicide note on Facebook.

Earlier in the week, the Kentucky Center for Investigative Reporting published an expose of Johnson’s life, including years of deceptive claims, alleged criminal activity and accusations from a woman who says Johnson assaulted her in 2013 when she was 17 years-old.

The revelations prompted calls for Johnson’s resignation from the Republican Party of Kentucky as well as the Republican and Democratic leaders of the House.

But on Thursday, lawmakers from both political parties expressed sorrow for Johnson’s death.

House Majority Whip Kevin Bratcher, a Louisville Republican, said he had talked to Johnson within 24 hours of his death and was shocked by the news.

“He said he was going to fight all these allegations and seemed in high spirits. It was just a shocker, it was almost like I was dreaming when I read the first headline,” Bratcher said.

Rep. Jim DuPlessis, a Republican from Elizabethtown, said he got to know Johnson during the legislative session earlier this year.

“Dan Johnson was my seat mate. I found him to be very kind, soft spoken, and concerned for others. He was passionate about others, I saw it often yet he needed help himself. Prayers for his family and for the turmoil in Frankfort,” DuPlessis tweeted on Thursday morning.

Rep. Al Gentry, a Democrat from Louisville, was elected to the legislature this year for the first time, along with Johnson.

“Saddened by death of Rep. Dan Johnson. Regardless of your feelings toward him and his personal challenges, he does leave behind a wife and five kids. Please keep them in your prayers,” Gentry said.

Johnson’s death has generated a wide spectrum of commentary on social media, including attacks of his character and political stances. On Thursday morning, Gov. Matt Bevin asked followers on Twitter to be respectful of Johnson’s family:

Would ask sincerely that all the nasty, vulgar comments & other despicable responses to the news of KY Representative Dan Johnson’s death, be kept in the minds and hearts of those who have them...Don’t share..Please have respect for his family and friends at this time...Thank you

Johnson was a freshman lawmaker who had drawn headlines for proposing controversial pieces of legislation and posting racist images and comments on Facebook during his 2016 campaign.

The KyCIR article reported a variety of questionable claims made by Johnson — that he had raised someone from the dead, and that he had set up a morgue at the site of the 9/11 World Trade Center attacks.

It also included reports of criminal activity — allegations that Johnson ran an illegal bar in the church and that he was a suspect in a suspicious fire that burned down the church’s original building.

The sexual assault allegations prompted calls for Johnson to resign his seat.

Johnson flatly denied the allegations in a news conference on Tuesday morning, saying accusations published in the story were politically motivated.

Johnson’s body was found by family members who went searching for him after Johnson’s suicide note was posted to Facebook Wednesday night, according to the Bullitt County Sheriff.

Johnson’s widow, Rebecca Johnson, said Thursday that she will file to run for his seat, according to the Associated Press.

House Majority Whip Bratcher said he knows Rebecca Johnson and that she seems “up to the task.”

“It seems like a lot of things are falling of the track right now, but we’re going to do the people’s business in January and move forward,” Bratcher said.

Bevin would have to call a special election to fill the seat vacated by Johnson.