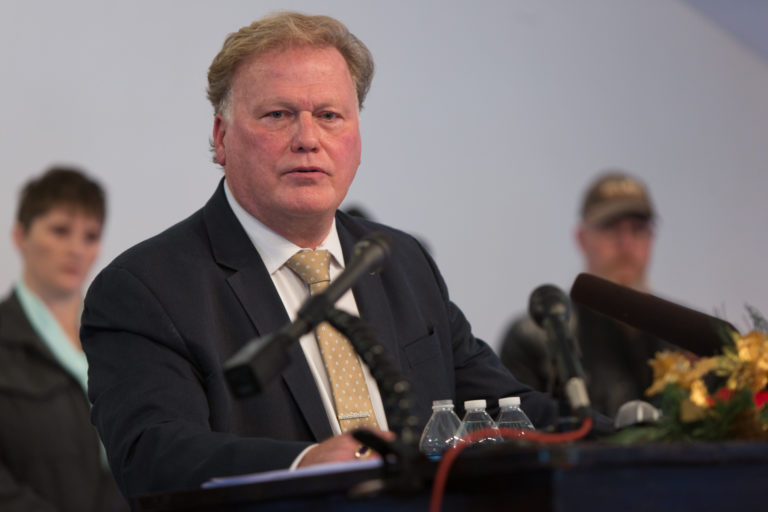 Johnson, a freshman lawmaker and pastor of Heart of Fire Church in the Fern Creek neighborhood, allegedly molested a 17-year-old girl on Jan. 1, 2013.

Police initially opened an investigation in April 2013, but closed it months later without ever interviewing Johnson, documents show. Johnson, while refusing calls for his resignation from leaders of both political parties, denied the sexual abuse allegation in a press conference Tuesday morning.

A KyCIR investigation published Monday outlined Johnson’s history of alleged crimes, lies and deceit and included a woman’s account of the alleged molestation. The account, based on police files and interviews with Maranda Richmond and her family, detailed how detectives closed the sexual assault case, citing Richmond’s lack of cooperation.

But Richmond denied that assertion. She said she had always pushed for Johnson’s prosecution. Experts who reviewed the case file at the request of KyCIR said police botched the investigation from the beginning, misclassifying the charge and more.

Richmond alleged Johnson molested her in the church’s basement following a New Year’s party. She said Johnson shoved his tongue into her mouth, pushed his hands down her pants and penetrated her with his finger.

Richmond spoke at length about the encounter and the impact it had on her life. She shared notes from her therapists and police files, including a scratchy recording in which her father, at the LMPD’s behest, called Johnson on a recorded line and sought his confession. She also shared a Facebook message from Johnson in which he claimed he was drugged that night and apologized for being “mean” to her.

Following the KyCIR report, Louisville Mayor Greg Fischer called for an internal review of LMPD’s handling of the assault case. Fischer’s spokesman Chris Poynter confirmed on Tuesday that there is again an active investigation.

“The mayor will now let that investigation proceed,” Poynter said.

A defiant Johnson criticized Fischer for seeking the review.

“This thing has become politicized,” Johnson said. “He’s a Democrat and I’m a Republican, we stand on two different playing fields totally on what we believe in.”

“That’s preposterous,” he said. “It has nothing to do with politics, parties or anything like that — it’s just about getting the facts.”

The state’s Republican and Democratic leaders have called for Johnson’s resignation. He made clear in his news conference he has no plans to do so.

“This allegation concerning this lady, this young girl, absolutely has no merit,” Johnson said.

Johnson cited President Donald Trump and Alabama Senate candidate Roy Moore, both of whom have been dogged by claims of sexual harassment and assault. “It just seems like there are a lot of people that are willing to jump to judgment without any proof,” Johnson said.

“If that’s the case, I’ll tell you what, Frankfort may have a bunch of empty seats if it runs off of just accusations,” he added.

Louisville Metro Police Sgt. John Bradley on Tuesday said Johnson is again being investigated by the Crimes Against Children Unit. He declined to provide details of the investigation and would not say if Johnson has been contacted by detectives.

Johnson on Tuesday pledged to cooperate with police if he’s questioned by detectives.